It’s summer again and as the hot beverage business slows, we have time to revisit some old ideas for new tea blends and see where we can take them. Our Literary Tea Line has been hugely successful so far and we’re pleased to introduce you to its newest additions. We’ve been playing with a few ideas and we finally settled on the pair of authors for whom we’ve gotten the most requests. One of our new blends was created with the works of Louisa May Alcott in mind while the other was designed to evoke the stories of Edgar Allan Poe. 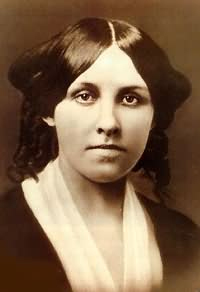 Born on November 29, 1832 to Transcendentalist parents, Louisa May Alcott grew up poor among some of the most famous intellectuals of the 19th century. She and her sisters took jobs as teachers, seamstresses, and governesses to help pay the family’s bills. Her father mandated that every member of his household keep a journal and so they all did. Writing offered young Louisa an escape from the rigors of daily life and, with her vivid imagination, she took to it with a passion. Her publishing debut, when she was only 22, was a collection of tales called Flower Fables that she wrote for Ellen Emerson (Ralph Waldo Emerson’s daughter). In 1862, she began serving as a nurse at a Union hospital during the Civil War. Even though she had intended to serve for three months, she was only able to help for six weeks because she caught typhoid. Little Women, the semi-autobiographical novel that Louisa started when her publisher asked her to write “a book for girls,” was written in the spring of 1868 at Orchard House, the family home where she grew up. It’s a story about a family growing up in Concord, Massachusetts during the war. The main character, Jo March, quickly became a favorite role model because she was a strong-willed woman who acted for her own interests and didn’t let anyone push her around. She wasn’t, as many of the female characters of that time were, an idealized stereotype of obedient womanhood. A vocal supporter of the abolitionist, feminist, and suffrage movements, Louisa May Alcott is considered the first woman registered to vote in her home town of Concord, Massachusetts. By the time Louisa May Alcott died on March 6th, 1888, she had published over 30 books and collections. 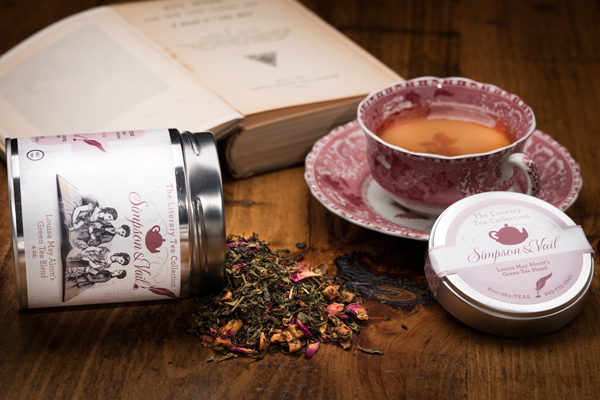 For our Louisa May Alcott blend, we looked to Little Women for foods and found ample inspiration. Early in Little Women, while visiting a sick Laurie, Jo says that her sister Meg’s blancmange is made “very nicely.” Later, when Jo tries to cook a meal on her own, her dessert attempt turns out “lumpy” and accompanied by strawberries that were “not as ripe as they looked.” Our blend follows Meg’s example and is almost, as Laurie says, “too pretty to eat” (or, in our case, drink).  Combining almond and strawberry flavors, this blend brews to a delicious tea that is fruity and aromatic. It manages to be sweet and light at the same time thanks to the Chunmee green tea base and the gentle floral notes added by the rose petals.

Louisa May Alcott’s works put her characters through their share of trouble and strife, but they always maintained a hopeful tone. On the opposite end of that spectrum is our next author: Edgar Allan Poe. He is, by far, the author for whom a tea blend has been requested the most. Although his stories and poems do not offer much in the way of inspiration for flavors, we managed to find just enough to work with and came up with a blend that we’re very proud of. 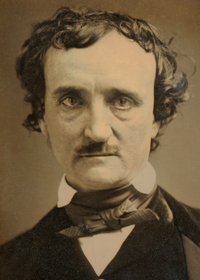 Edgar Allan Poe was born on January 19th, 1809 to a pair of actors. When his father left the family and his mother died, the orphaned Poe was taken in by the Allan family. While he was never officially adopted, his foster parents had him baptised as Edgar Allan Poe in 1812. His publishing career began in 1827 when his collection Tamerlane and Other Poems was published. It was credited only to “a Bostonian”. Poe turned his attention to prose and worked for several literary journals where his skills as a critic were well recognized. That line of work required travel and he moved between Baltimore, Philadelphia, and New York. When Poe was 26, he eloped with his first cousin, Virginia Clemm, in Baltimore. She was only 13 at the time. In 1845, he published his poem The Raven to immediate and resounding success. In 1847, Virginia, who had been sick for a number of years, died from tuberculosis. Poe was very much a cat person, and accounts exist of him writing with a cat perched on his shoulder. His pet cat, Catterina, is said to have died on the same day as Poe, but miles away. For a man whose writings explored death in all its forms, Poe’s death remains something of a mystery. He died in Baltimore on October 7, 1849 but the cause of his death remains unknown. It has been suggested that he died of anything from alcohol, drugs, heart disease, suicide, all the way through a number of serious illnesses. One of Poe’s rivals, Rufus Griswold, was upset at the things Poe included in his criticism of Griswold’s writing, so he wrote an obituary and a biography that painted Poe as a drunken womanizer in an attempt to discredit Poe in the eyes of the public. While Poe has passed on, his effect on the literary world has withstood the test of time. He invented the detective story with The Murders in the Rue Morgue and incorporated contemporary scientific theories into stories that touched on galvanism, time travel, and resurrection to kickstart the burgeoning science fiction movement. His poetry has been studied, deconstructed, and imitated an almost unfathomable amount throughout the years. 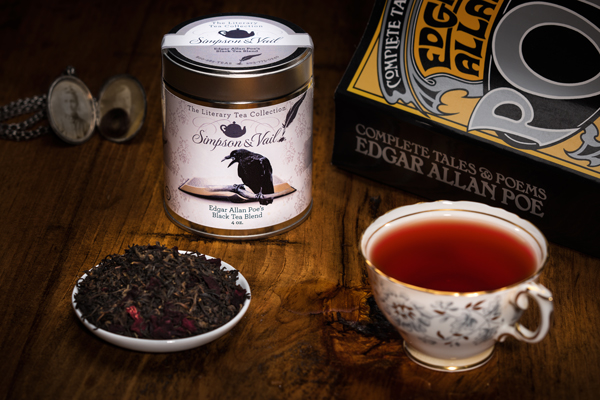 Because foods and drinks are rarely mentioned even in Poe’s longer works, we had to get creative with how we went about designing this blend. After much experimentation, we finally settled on a black tea blend that is dark and earthy to evoke the damp tombs found in Poe’s stories. While it is perhaps the most well known, The Cask of Amontillado is not Poe’s only story in which his fear of being buried alive becomes a major plot point. His vivid descriptions of “utter darkness among a quantity of loose earth” that “threaten[ed] to bury [him] entirely” offered a direction for our blend. It combines the earthy tones of Pu-erh black with the mellow smokiness of Lapsang and the slightest citrus hint of an Earl Grey. The dried beetroot turns the brewed tea a deep blood red.

In the future, we might look into adding even more authors to our Literary Line, but for now, these 12 will have to do. We welcome your comments on this line as well as your suggestions for future authors. Happy reading and sipping! 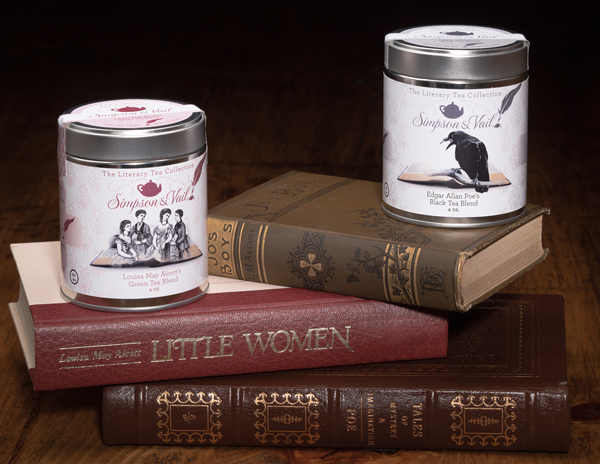