This is the final blog of our Literary Tea Line introduction series. We only have three authors left and, as you can see in the title, they are some big names. This week, we’ll go through the life of the Bronte sisters, Beatrix Potter, and Lewis Carroll and explain why we chose the blends we did for each of them.

First off, we have the the Bronte sisters. We decided to make one tea blend for all three so we didn’t have to choose between them. Charlotte, Emily, and Anne lived and wrote in Yorkshire, England. Born in 1816, 1818 and 1820, respectively, the sisters lived very short lives, with Charlotte living the longest at 38. During their tragically truncated lifetimes, each sister produced novels that would become cornerstones of western literature and inspire studies for generations. The sisters originally published their works under male pseudonyms. They chose the surname Bell and picked first names that matched their initials. Charlotte was Currer, Emily was Ellis, and Anne was Acton. Emily’s Wuthering Heights, Charlotte’s Jane Eyre, and Anne’s The Tenant of Wildfell Hall each found an audience and acclaim that continues to this day. Charlotte Bronte’s 1849 novel Shirley popularized the phrase “wild west” and Anne Bronte’s Tenant of Wildfell Hall has the first recorded use of the word “cardboard.” With their novels, the sisters introduced the world to a starkly honest portrayal of English womanhood that didn’t hide the ugliness and intrigue many novels of the time shied away from. Although tame by today’s standards, their inclusion of independent female characters, alcoholism, and abuse meant that the Bronte’s novels faced their share of controversy. After Jane Eyre’s publication in October 1847, the Bronte family lost Emily in December, Anne in May, and their only son, Branwell, the following September. When Emily Bronte was near the end of her life, her dog Keeper, a huge mastiff mix, kept watch at the foot of her bed and, once she had passed, is said to have mourned and visited her grave.

The Bronte family kept an orchard and garden where the sisters spent much of their time exploring, drawing, and writing. Charlotte was more inclined to draw the flowers and the plants than to stop and smell them, but Anne and Emily were happy to get their hands dirty with a little gardening. Emily especially, who was known to be a bit of a recluse, could often be found taking long walks and enjoying nature. Our Bronte Sisters tea blend combines pear, apple, and gooseberry flavors to make a sweet and fragrant blend that’s reminiscent of an orchard stroll. The flavors in this blend meld together in perfect harmony and the taste lingers deliciously on the palate.

The books of the Bronte sisters are not an easy read and their works aren’t suitable for a young audience. However, no collection would be complete without something for the young and the young-at-heart. We selected Beatrix Potter as a prime example of classic children’s literature that has withstood the test of time. Her stories are every bit as endearing and fun today as they were when she wrote them in the early 1900s. 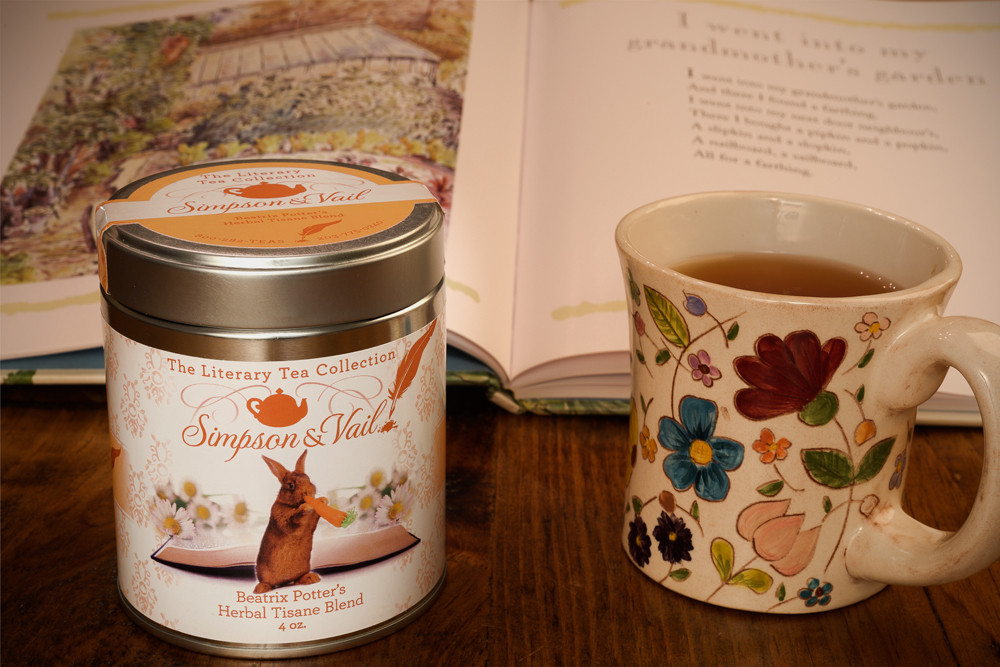 Beatrix Potter’s talent as an illustrator surfaced shortly after she was born to wealthy parents in 1866. She spent her childhood enjoying long walks in the countryside with her brother where she drew everything she could see. She developed a special affinity for drawing the local animal life, especially rabbits. During the 1890s, she and her brother designed and printed cards, for Christmas and other occasions, to earn extra income.  These cards featured the animals she loved to draw. Her pet rabbit, Benjamin Bouncer, served as the model for many of her early illustrations and would later inspire her most memorable creation. In 1902, her first book, The Tale of Peter Rabbit, was published and became immediately and immensely popular. Many of Potter’s books, including The Tale of Peter Rabbit, began as story letters to friends’ children. She borrowed them back from the recipients to turn the stories into books. The success of Peter Rabbit rocketed her to literary fame and, even today, her books are a mainstay of children’s collections everywhere. She left 4,300 acres to the National Trust, ensuring much of the Lakelands would remain protected forever. She also left them most of her original illustrations. Many can be seen today in the Beatrix Potter Gallery in Hawkshead, England.

As evidenced by the myriad plants she mentions in her stories, Beatrix Potter was a lover of nature and an avid gardener. In her stories, tea takes the form of healing herbals like the one given to Peter Rabbit: “I am sorry to say that Peter was not very well during the evening. His mother put him to bed, and made some camomile tea; and she gave a dose of it to Peter!” Our Beatrix Potter blend combines a soothing selection of herbs she mentioned with an organic green rooibos base that is both healthful and delicious for the young and young at heart. 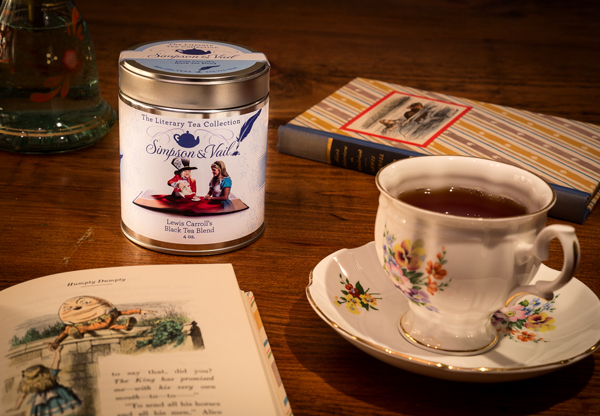 We also included Lewis Carroll. Although he was born as Charles Dodgson and wrote eleven books of mathematics under that name, all his children’s novels were written under his pseudonym. His most popular work, the novel Alice in Wonderland, has inspired many adaptations over the years as well as much debate.

The man who would become Lewis Carroll was born as Charles Lutwidge Dodgson in January 1832. He spent his happy childhood under the tutelage of his Reverend father, and enjoyed creating fantastical stories for his ten siblings. He suffered from chronic migraines, epilepsy, stammering, partial deafness, and ADHD. It was not until after he had graduated university and became a lecturer of mathematics that he met Alice Liddell. He would entertain her and her sisters with the absurd stories that he later published as Alice’s Adventures in Wonderland. An avid letter writer, he was known to pen upwards of 2,000 letters in one year, and he would sometimes write backwards, forcing the reader to hold the letter to a mirror to decipher. Carroll also loved games and tricks with his words. He created the word “portmanteau” (which mean 2 words that are blended together to form a new word) to describe the new words he had created such as chortle (chuckle and snort), galumph (gallop and triumph) and mimsy (miserable and flimsy). His most famous novels conveyed a childlike look at the seemingly arbitrary rules and customs of adult society.

A tea party plays a memorable role in Carroll’s most celebrated novel as the setting for Alice’s nonsensical meeting with the Mad Hatter and the March Hare. “A large rose-tree stood near the entrance of the garden” where, as the Mad Hatter told Alice earlier, “it’s always tea time.” To make our Lewis Carroll blend, we added our fragrant violet flavor to an Indian Black tea and Rose Congou tea, a China black that has been scented with rose petals during the drying process, to create a deep amber cup with an incomparable bouquet and a flavor that is absolutely heavenly.

The Literary Tea Line has been a labor of love for the past few months and we’re proud of this addition to our vast repertoire of teas. These teas are all delicious, unique and, we think, representative of these authors. We hope this series of blogs has given some insight into the lives of the authors we have chosen and the blends we have created for them. We welcome your comments on this line as well as suggestions for future authors to feature. Happy reading and sipping!