The origin of Iced Tea

A heat wave burned across the midwest on the morning when the India Tea Commissioner Richard Blechynden and his staffers set up the East Indian Pavilion for the 1904 Louisiana Purchase Exposition. Blechynden hoped that free cups of tea would convince people more familiar with the Chinese variety that his Indian tea had potential. 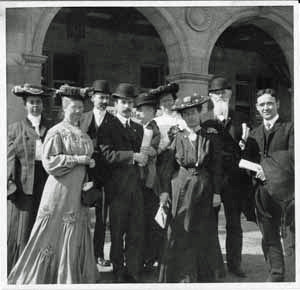 A Group of Librarians at the 1904 World’s Fair in St. Louis. This photograph was digitized as part of the ALA Archives Digital Collection. American Library Association Archives Record Series 99/1/14.

But when the fair got underway, the temperatures did not subside. Instead, they rose and rose as more and more people gathered to see exhibits from 62 different countries. Women wandered the fair in full-length dresses and wore wide-brimmed hats to protect them from the sun while the men wore three-piece suits. The fashion of the day meant that everyone was suffering from the high temperatures.

20 million people visited the fair and Blechynden was desperate to promote his tea to as many of them as possible, but in the heat, few fairgoers were interested in a hot beverage. As more and more people passed his pavilion without a second glance, a delivery of ice to a nearby food stall caught Blechynden’s eye.

Refrigeration had not yet been invented and ice was a luxury to many people. It had to be harvested in the winter and then insulated with sawdust and stored until summer. In places where the water didn’t reach low enough temperatures to freeze, ice had to be brought in by train.

Blechynden bought several blocks of ice and his staffers began filling glasses with ice chips. They poured in the hot tea with some sugar and served the refreshing beverage to whoever wanted it. And everyone wanted it! The drink was a huge hit as the overheating crowds grabbed whatever relief they could find.

Blechynden wasn’t the first to serve tea cold, as cold tea had been popular in alcoholic punches in the previous century and iced tea on its own wasn’t unheard of, but he did popularize it. With an audience of 20 million people, all clamoring for a respite from the stifling heat, Blechynden was able to cement a foothold for Indian tea in the American market and a thirst for iced tea that continues to this day. 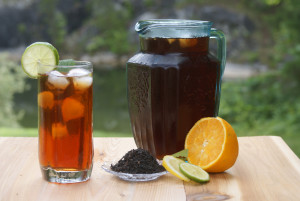