To continue our series of Literary Tea introduction blogs, we move on to some authors who are less well-known. You may have heard their names before or be familiar with their work, but these four don’t command the same immediate recognition that Shakespeare, Austen, and Dickens enjoy. 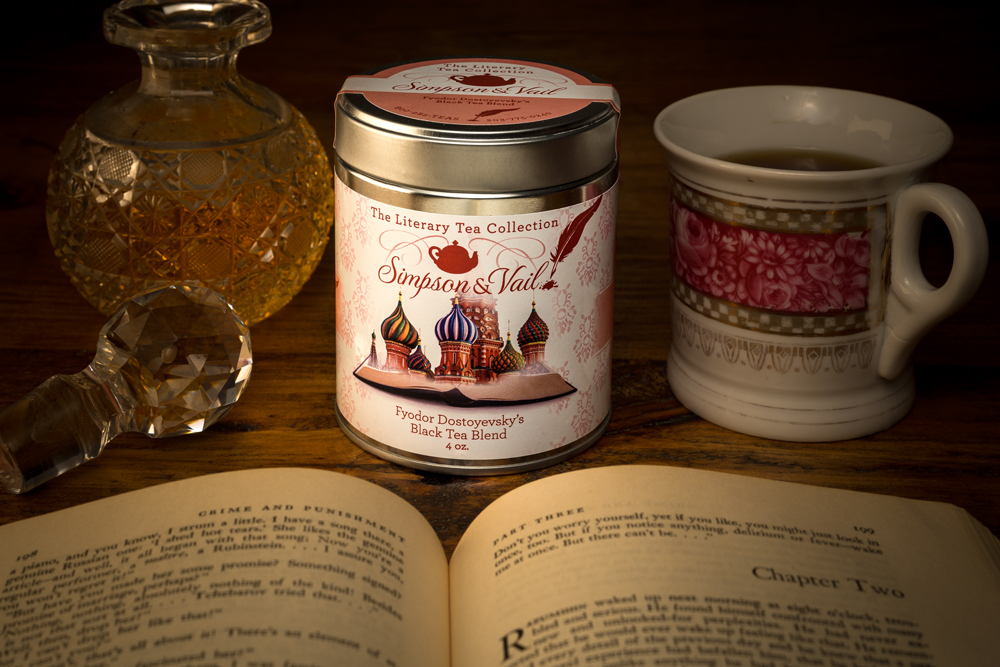 Some of the greatest works of literature require a knowledge of multiple languages or a great translator to be enjoyed by English readers. Fyodor Dostoyevsky wrote many such novels. He was born in Moscow in 1821 and spent the first sixteen years of his life among the orphans, criminals, and asylum patients with whom his father worked. The 1846 publication of his novel Poor Folk gave the young Dostoyevsky his first taste of literary fame, but it is Crime & Punishment and The Idiot that cemented his legacy. He was arrested in 1849 because of his affiliation with a literary discussion group that espoused anti-monarchy ideas. Originally sentenced to death, he was instead imprisoned in Siberia, serving 4 years in prison and 4 years forced service in the Siberian army. His works examined the complicated relationship between ideology, political climate, and personal upbringing and how they each affect a person’s psyche. In 1867, he married  Anna Grigoryevna Snitkina, his second wife, who he had hired as a secretary the previous year. They had four children together. The saintly character, Alyosha, in “The Brothers Karamazov” was named for his son who died young. His novels served as a precursor to existentialism, and they are pivotal in the Russian Symbolism Movement.

Tea plays an important symbolic role in Dostoyevsky’s writing, where it often serves as a comforting staple in an otherwise chaotic world. In Poor Folk, he writes that “all the world needs tea” and then later the main character reminisces about a simpler time when he could be “sitting in [their] little parlour at tea with [his] parents—in the familiar little parlour where everything was snug and warm!” The Russian samovar provides warmth and a central meeting place equivalent to the watercooler. Our Fyodor Dostoyevsky tea blend is an approximation of a typical Russian blend of the time, and it recreates the flavors that he and his characters would have savored. This blend brews to a bright copper cup with a mellow, flavorful, medium-bodied taste and a lemon-citrus aftertaste. 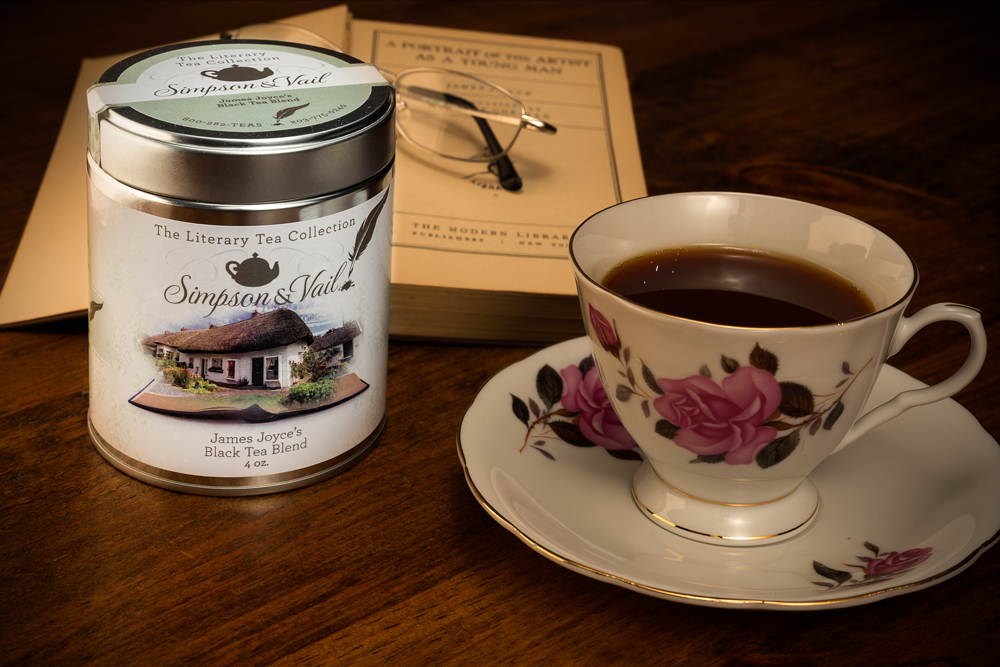 A novelist whose works may need a translator even though they’re written in English is James Joyce. His name will certainly be familiar to anyone who’s been assigned sections of Ulysses for an English class. James Joyce was born February 2, 1882 in a suburb of Dublin, Ireland. Incidents during his childhood caused Joyce to develop two serious phobias: one of dogs and another of thunder and lightning. He attended a private boarding school until his father’s debts caught up with the family and he and his siblings were forced to leave. He would later attend college and, while he achieved high marks, his views never aligned with the Jesuit professors. A collection of his short stories, The Dubliners, was published in 1914 and introduced Joyce’s dense and atmospheric prose to the world. Joyce knew 17 languages including Italian, Arabic, Sanskrit, Greek, and Norwegian. He would go on to travel Europe, spending most of his productive years in France, where Ulysses was published in 1922. Ulysses takes place on a single day, June 16th, which is the date in 1904 that Joyce went on his first date with Nora Barnacle who would later become his wife. In Finnegan’s Wake, Joyce made extensive use of portmanteaus (two words that are blended together to form a new word). Words like “ethiquetical” (ethics and etiquette) and “fadograph” (fading and photograph) are examples of this. Joyce’s influence continues into the 21st century where his method of conveying the complexity and chaos of random thought as a stream of consciousness is still in use. When he died on January 13th, 1941, his final words were, “Does nobody understand?”

For Joyce, tea was an expected part of life and it appears in his works as a routine part of the day. As a man of taste, he enjoyed the finer things in life and, as an article describing a meeting at his house says, “Mrs. Joyce gives us the best tea and the nicest cakes that are to be had in any house in Paris.” Our James Joyce tea blend uses a distinctly Irish mix of black teas to mimic the type of drink he and his friends would have enjoyed. This blend brews to a golden cup with a malty flavor and a slightly fruity aftertaste. 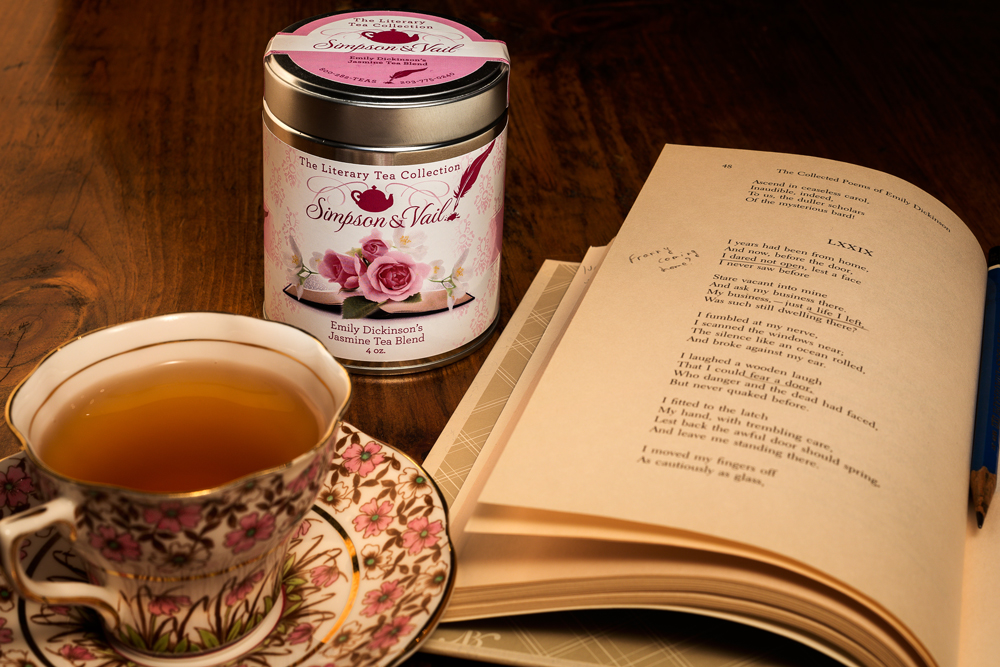 While the next author’s poetry is lighter than Joyce’s dense prose, her works are no less intricate. Even after years of careful study, her poetry continues to provide new insights. This author is, of course, Emily Dickinson. She was born on December 10th, 1830 and lived in a home that was central to Amherst political society thanks to her father and brothers. Growing up around powerful men prepared Dickinson for a life of the same, but society dictated that, as a woman, she was relegated to seemingly less meaningful ventures. Her anger at this slight comes across in her poetry and letters where she explored complex ideas of meaning and self while examining the smallest details of the world around her. She withdrew herself from society and lived in relative solitude until her death. Her voluntary seclusion, and her penchant for wearing white, garnered her several nicknames among them the ”Myth of Amherst”, the “Nun of Amherst”, and, after her death, the “Belle of Amherst.” Dickinson was seemingly uninterested in publishing her works. In fact only about 10 of her poems were published in her lifetime. After her death, the enormity of Dickinson’s works was discovered. Her sister, Lavinia, discovered over 1000 of Emily’s poems. Some volumes of her poetry were then published although they were heavily edited. The full collection of her poems was published, as she had written them, in 1955. Her poems reveal a complicated mind that examined itself with as much attention to detail as it examined the world. Dickinson’s works are unique for the time due to her unconventional punctuation and rhythm as well as her use of short lines. Further breaking convention, Emily never gave titles to her poems she simply numbered them. Her defiance of categorization and simplification make her a popular poet to study even today.

In the years she spent away from society, Emily Dickinson cultivated an extensive garden. In it, she grew jasmine flowers, cornflowers, roses, and many other flowers, plants and herbs. These flowers appear repeatedly in her poetry so our blend had to be floral. We created a delightful combination of jasmine tea and rose petals that brews to a light ecru cup with long green leaves and rose petal accents. This delicate tea hits you with a strong jasmine taste that’s sweetened and mellowed with the subtle flavors of the rose petals. 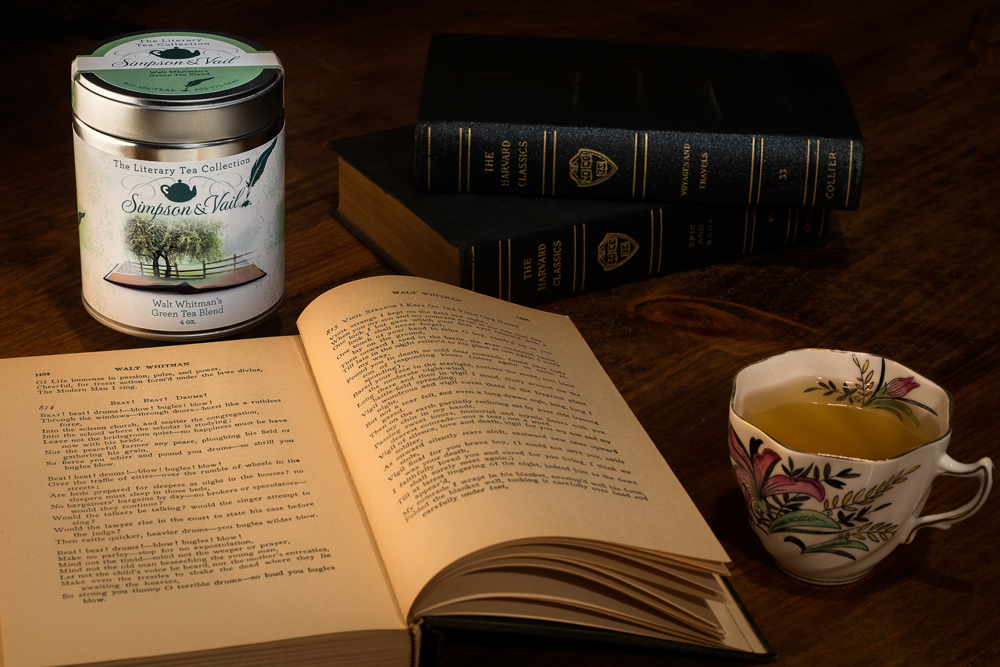 The final author for this week is another poet. His poems and stylistic innovations offer a look into the mind of a political and literary rebel and thinker. Some know him as the “bard of democracy” and the “father of free verse,” but most would recognize his given name, Walt Whitman. Walt Whitman was born May 31, 1819 to a housebuilder and his wife in Brooklyn. His parents were patriotic and three of his seven siblings were named after American icons: his brothers Andrew Jackson, George Washington, and Thomas Jefferson Whitman. He was introduced to the written word at the age of 12 when he began working as a printer’s apprentice. There, he taught himself to read and devoured the classics. When the printing house burned down, Walt taught for five years until he decided to pursue journalism. The first edition of Leaves of Grass, a rough self-published volume of only twelve poems, was printed in 1855. He continued to work on the book throughout his life and it grew to contain more than 400 poems by the time of his death. Though his contributions to poetry are considered some of the most important in American history, Whitman did not enjoy success in his lifetime. He spent much of his life struggling to get by with only a meager clerk’s wage to support himself as well as his mother and invalid brother. An 1882 edition of Leaves of Grass finally afforded him enough wealth to buy a house in Camden, New Jersey where he would work on Good-Bye, My Fancy until his death. He died on March 26, 1892 and was buried in a tomb in Harleigh Cemetery that he designed himself.

Our Walt Whitman tea blend is inspired by his beautiful nature imagery in Leaves of Grass, especially the poems he wrote about roots and herbs. In one of his memoirs, Whitman describes a man who “express’d a great desire for good, strong green tea.” This blend is an earthy and mature variation on Simpson & Vail’s Lemon Ginger Green Tea. It combines an unobtrusive organic green tea base with the earthiness of ginger and eleuthero roots and the sweetness and acidity of lemon (with lemongrass, lemon peel, and lemon flavoring).

Next week is our final Literary Tea introduction blog. The last three authors will get their chance in the spotlight. We’re super excited about the research we’ve done and are eager to share it with you. This line is the result of months of hard work and it’s both a relief and a pleasure to finally release it for your enjoyment.