St. Patrick’s Day is almost upon us, and while the beverage most associated with this holiday is Guinness or (shudder) green beer, it seems like an opportune time to talk about the beverage most consumed in Ireland, tea.

My best friends (Amy and Michael) moved to Dunmore East, County Waterford, Ireland 15 years ago and lived there for ten years.  I was fortunate to be able to visit them at least once a year while they were there and every visit was wonderful.

During the second year of living there they opened a café called The Melting Pot in Michael’s family’s house.  Amy asked me on one of my visits to bring over some loose tea that they could serve in the café since teabags were the only readily available form of tea in Ireland at the time.  When she served the loose tea to customers who were over 45 years of age they would happily reminisce about drinking loose tea when they were growing up.  But for most people younger than 45, loose tea was a novelty.  They had never seen it before and they were intrigued by the process of brewing loose tea. Michael has 6 younger brothers and it never failed that one of them would always be offering a cup of tea to me at any given time.  If I happened for the kettle first, they would always ask me to make loose tea and would come in to watch how I made it.  Invariably when I called in to anyone’s house the first question I would be asked was if I wanted a cup of tea.  I love the hospitality in Ireland!

The view from the Melting Pot. It was a beautiful place to enjoy a cup of tea!

The tradition of tea drinking in Ireland goes back to the early 1800’s when tea was introduced to the upper class.  Today, popularity of this beverage has risen to such heights in Ireland that they are ranked as one of the top tea consuming countries in the world.  2009 statistics showed that Ireland consumed roughly 7 lbs of dry leaf tea per year per person.  At approximately 200 cups per pound of dry leaf, this is quite a lot of tea!  For the same period, the US ranked 69th in the world with only 3/4 of a pound of dry leaf consumed per person.

It’s perhaps not completely surprising that US tea consumption has been lower than other countries.  High taxes on tea to benefit the Crown, forced the Colonies to famously stage their tea parties and resulted in tea drinking being very unpopular.  Ireland also has a higher consumption of tea compared to the US because tea is considered an all day beverage.  It is, generally, consumed throughout the day and all week long.  In the US tea drinking habits vary but there is a large population that consumes tea only in the afternoons, or only on weekends, or just caffeine-free tisanes in the evening while consuming mostly coffee as the “pick-me-up” beverage.  It is not surprising though that tea consumption, once stymied because of English taxes, has been rising in the US over the last 10-15 years.  What is surprising is that Ireland’s consumption has also been increasing over the last few years.

Part of the increase that Ireland is enjoying is coming from the re-introduction of loose tea leaf to the mass market.  Teabags started to become popular in the 1970’s and now comprise 97% of the market today in Ireland.  When discussing the subject of teabags it should be noted that the teabags in Ireland are a much different product than what is generally found in US supermarket teabags.  Teabags in Ireland contain high quality teas and contain 2.5-3 grams of tea in each teabag.  In the US many supermarket teabags only contain 1.5-2 grams of tea in each bag and generally contain inferior teas.

So while teabags have been mostly consumed over the last 40+ years, loose leaf tea consumption is on the rise in Ireland as well as a greater variety of loose tea blends (flavors, green teas, etc).  Some of this increase can be attributed, like in the US, to the many articles being published regarding the health properties associated with tea.  Black tea, as of 2011, was still the predominant favorite accounting for 96% of the sales in Ireland.

Tea was first brought into Ireland in the early 1800’s but it was only available to the upper classes.  By the mid-1800’s though, tea had already become popular with the middle classes. There were some who worried that the consumption (or over-consumption they thought) of tea was ruining the frugal, restrained values of the people in rural Ireland.  An article was published in 1920 entitled “Tea is Ireland’s Evil – Ranks before Alcohol as an Enemy of Public Health.”   These “tea-totalers” began distributing pamphlets extolling the virtues of a life without tea, a life that should be returned to the values of hard work and not to expansive luxuries.  There was a focus in these pamphlets on impoverished women.  It was proposed that a woman drinking tea was indulging in a luxury that was taking away from her duties to provide a clean house and meals to her husband and children while wasting money on herself.  For the men who consumed it, the “reformers” warned that the taking of tea was preventing them from working and therefore inhibiting the economic growth of all of Ireland.

It should be noted though that the perceived “evil” of tea drinking was not aimed at the wealthy tea drinkers, but rather was aimed at the poor and middle classes.  It was the upper classes who worried that the economic stability of Ireland would be compromised if the lower classes continued to “waste” their time and money on tea instead of focusing all their energies on working.

Despite these self serving attempts at controlling tea consumption, the enjoyment of tea continued for all.  Prior to WWII England directly imported tea from overseas and then distributed it to Ireland.  After the war though Ireland began directly importing tea themselves and began to change the taste  profiles of the teas coming in to the country based on Irish tastes.  These Irish companies began experimenting with different tastes and predominantly settled on blends that favored teas from Kenya, India (Assam) and Sri Lanka.

When I got home from one of my trips to Ireland a customer in the store had just returned from the same area of Ireland I had been visiting. He was looking for an Irish style tea similar to what he had enjoyed there.  Our Irish blend, which was created by Mr. Vail in the 1930’s, contains a little bergamot, which is not commonly found in the most popular Irish blended teas today. After a few weeks of heavy tea drinking in Ireland I knew exactly what he was looking for, and so I made up our Dunmore East blend, which is a blend of Assam, Kenya, and Ceylon teas.  It is still one of our most popular blended teas! 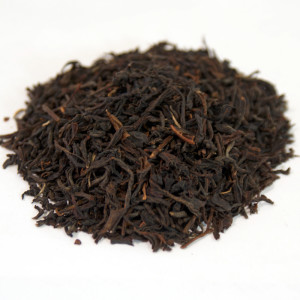 I will always treasure my Ireland adventures and look forward to my next visit.  It will be interesting, after a few years now, to experience the changes in tea drinking habits and to discover all the tea shops that are popping up around the country.  I wish you all a happy St Patrick’s Day!