The Many Uses & Benefits of Lavender

It seems that most towns across the country celebrate the advent of Spring with a Spring Tea party, a time for everyone to shake off the hibernation of winter and come together as a community.  We all have our Spring-time rituals.  Usually when I hear the Spring birds singing, I start seeds indoors and plan this year’s garden.
One of the plants that is essential in any garden I create is lavender.  I love the aroma of lavender and the variety of ways lavender is used: from cosmetics and culinary recipes to medicinal purposes.  And while it doesn’t bloom here in CT until later in the Spring season, I still associate the taste and smell of lavender as a harbinger of the season of new growth, color, light, warmth and possibilities.

Lavender is a flowering perennial herb that is native to the Mediterranean and, while it is now cultivated in many other places, a vast amount of the lavender available for purchase today is grown in France.  Lavender’s name is derived from the Latin lavare (to wash) because of its long use in bathing rituals and laundering.

While it is used extensively by home gardeners as an ornamental garden plant, lavender blossoms and lavender essential oils have been used for thousands of years for a variety of uses.

These beautifully fragrant flowers can be found in lotions, soaps, eye pillows, bath blends, massage blends and more. Muslin bags filled with lavender make a fabulous sachet for your clothing drawer or in the dryer to infuse your clothes with this heady smell. Add some to the bath to help alleviate tension, stress and insomnia.  See the recipe section of our website and find recipes for Lavender Massage Oil, Lavender Body Powder, cologne, facial steams, bath blends and more.  They make wonderful products for yourself or for gifts! 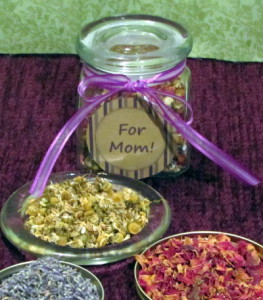 The use of lavender for cosmetic purposes is documented throughout history.  The Phoenicians and Romans used lavender blossoms for bathing.  The Romans also used the blossoms to perfume their clothes and hung bunches of blooms to freshen the air.  Oil made from lavender blossoms was used by the Greeks and Romans to anoint their feet, hair and bodies.

Evidence of the Egyptians using lavender for cosmetic purposes has been found in tombs.  They also used it for the process of mummification, by soaking the burial shrouds in water infused with lavender blossoms prior to wrapping their dead.

There is also documentation that says that Cleopatra seduced Julius Caesar and Mark Antony while wearing lavender scents.   I have also found evidence that Cleopatra used rose petals for seduction, so it seems that Cleopatra was wise in using all the fragrant blossoms at her disposal!

Ladies in Tudor England, like the Romans before them, were said to use lavender for bathing, to scent linens and for freshening the air.  These English ladies also found that the scent of lavender was useful at repelling insects.  Laundry women were known as “lavenders” for their use of lavender in scenting clothes.

During Queen Elisabeth’s reign it is said that she loved lavender so much, for use in teas (for medicinal reasons), foods (especially lavender conserve), and in perfumes, that she is credited for the expansion of lavender farming in England.  She challenged gardeners by requiring fresh lavender flowers to be available year round!  Not an easy task.

Queen Victoria was also a lover of lavender and encouraged the growth and use of lavender and lavender products.  Naturally since the queen favored it, lavender was fashionable throughout England for use in perfumes, laundry and cleaning products, potpourri, soaps, medicines and more.  Unfortunately it was during this time that lavender started getting the reputation as an older woman’s scent and started to fall out of popular favor.  Thankfully lavender’s aroma is so enticing that it once again regained favor among the masses and today is still popular for use in a variety of products by people of all ages.

Personally, I have used lavender cosmetically when making soaps, oils, bath blends, perfumes, sachets and more.  I use laundry soap, dishwashing liquid and hand washing soap that have a lavender scent.  So it seems, like Elisabeth, that I too enjoy the aroma of lavender flowers year round!

Lavender’s history as a culinary ingredient is as long and important as its use in cosmetics.  Since the flowers are edible the uses are innumerable.  They can be sprinkled on salads to add color and a depth of flavor.  They can also be sprinkled raw onto soups and stews or sprinkled on a variety of entrees and desserts.  Try them on cakes, cupcakes, and ice cream and enjoy their beauty and fresh floral taste.

A very popular use of these flowers is in sweet recipes.  Lavender enhances teas, cookies, cakes and more.  A very easy and delicious use of lavender flowers is in scented sugar.  Just place the flowers in your sugar bowl, mix with sugar and cover tightly.  In a few weeks your sugar will be delicately scented with lavender and will make a great addition to your cup of tea or your favorite dessert recipes.  You can also mix lavender blossoms with softened butter and spread this seasoned butter on scones, toast, breads, and cakes.  We have a delicious Lavender Lemon Bundt Cake recipe on our website.  Lavender has also been successfully and delicious paired with chocolate to my great delight!

Lavender fields are a popular destination for beekeepers to create a honey with a wonderfully fragrant finish.  We’ve been carrying a lavender honey from West Virginia for years that is quite popular! 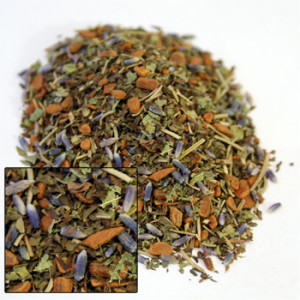 And last but not least, lavender flowers, we have found, enhance and add a depth of flavor to many different teas and tisanes.  We have created blends with lavender flowers that are very popular: Floral Nectar, Lavender Lace, Victorian Earl Grey, Rose Rooibos, Lady Myrtle’s Earl Grey, Namaste, Third Eye Chakra and Crown Chakra.

LAVENDER AS A MEDICINE

Medicinally, lavender has been used as a remedy for relieving anxiety and depression and for helping to relieve headaches that are associated with stress. In small amounts, it is said to aid indigestion.

Throughout 2,500 years of recorded history lavender has been employed for medicinal purposes.  Soldiers in ancient Rome used it for fighting infections and healing injuries. Others in Rome were using lavender (both internally and externally) for a variety of medical conditions: stomach problems, headaches, kidney issues, infections, skin problems and more.  It was used to deter insects using both the oil from the blossoms as well as using the dried blossoms (strewn on floor for perfuming the air)

References can be found for the use of lavender in the Bible, although it was called spikenard (or nard) at that time.  This name is derived from the Greek name naardus, after the Syrian city Naarda.  The Greeks documented the use of oils, especially nard, in anointing their feet.  They believed that this practice helped envelop the entire body in healing aromas by beginning at the body’s base.

The healing uses of lavender spread from the ancient Greeks and Romans to Arab physicians who in turn brought this knowledge to Europe.  During the Dark Ages the general population was no longer knowledgeable about lavender’s uses, but luckily the historical information was preserved for later generations by monks and nuns.

Lavender was deemed essential during the plagues that swept through Europe and Asia for centuries.  One story is of thieves who were able to steal from the sick and dead and not contract the disease.  There are many products available today called Thieves Blend which vary in the herbs that are believed to have been authentically effective at thwarting the plague and many contain lavender.

In 16th century England, Queen Elizabeth I drank lavender tea as a remedy for migraines.  All of the English herbalists at this time wrote about the medicinal benefits of lavender and it was widely regarded at that time as a general cure-all.

When the Shakers arrived in North America, in the late 1700’s, from England they brought with them many things including lavender.  They established lavender on their land and created lavender products for medicinal and cosmetic purposes that they sold to people outside their faith.

Lavender oil has been used in more recent history for helping to heal burns and prevent infection.  During World War I, with antiseptics not readily available, lavender oil was used in bandaging wounds.  It was considered at this time to be essential in first aid kits and used for a variety of purposes: as an antiseptic, for headaches, depression, stress, exhaustion, relaxation and more.  It was used as a remedy for chest colds and bronchitis and mixed with other oils (like almond or apricot) and rubbed on joints to ease pain.

People today still use lavender for many of these same purposes.  It can be found on grocery shelves, health food stores and doctor’s offices in a variety of products.  It is readily found in aromatherapy products, in perfumes, lotions, soaps, powders and more. It is a staple in many tea blends and enhances the taste profiles of many culinary dishes.

I have used lavender for all these purposes for over 30 years, at one time or another, and can’t imagine that I will ever stop using them.  The aroma of lavender flowers still uplifts me and when I discover them blooming in my gardens I am infused with happiness.  So off I go to plan my 2013 garden.  I think I have room for a few more lavender plants…..