Anna of Bedford and Afternoon Tea

September 3rd is the anniversary of the birth of Anna Russell, the Duchess

of Bedford, and the woman credited with creating the tradition of afternoon tea. While tea drinking in England, and meals with tea, certainly existed before Anna was born, she has been credited as the inventor of this pastime for a few reasons. Anna Russell was born into a prominent family, both in terms of wealth and their position in society. She was a great friend to Queen Victoria and as such held an influential position in society herself.

The ritual of afternoon tea began when the dinner meal in England started to be served later in the evening (around 8 pm). The time between lunch and dinner was so long that people began having a light repast in between those meals. Anna has been credited with starting the tradition of afternoon tea as we know it in the 1840’s. She served tea between 4 and 5pm and tea consisted of, well, tea of course and finger sandwiches and cake. She enjoyed this afternoon ritual so much that she began, on a daily basis, to invite friends to join her. These gatherings were about more than tea and snacks though, they were gathering places to gossip and discuss affairs of the day. It was important to be seen in the right households by the right people. Queen Victoria herself, because of her friendship with Anna, started hosting afternoon teas, which helped to spread this event throughout fashionable society to become the tradition we know today.

So while Anna didn’t “invent” afternoon tea, she certainly popularized it and made it more structured in terms of the attire, the foods served, etc… Her style of afternoon tea, at the time she began hosting teas, was more common in higher income houses because the laborers could not afford the tea or the accoutrements (teapots, strainers, etc.) nor did they have the 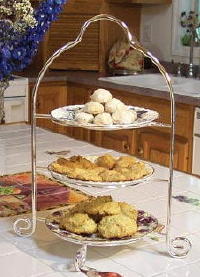 free time. Not long after Anna started hosting her teas, some time in the middle 1800’s, tea prices started to decline and tea drinking spread to more people throughout England.

There are a few different kinds of “teas”.  Afternoon/low teas are often confused with high tea but there are significant differences. High tea is served at a high table (a dinner table) and consists of the main dinner meal. This term is used mostly by the working class. Cream tea is a tea that is on the small, sweet side and consists of tea and scones with clotted cream and jam.  Low tea or afternoon tea is served around 4pm and the tea is usually accompanied by finger sandwiches, cakes, pastries and scones (usually with clotted cream and jam). Sandwiches are oftentimes cucumber, egg, roast beef, smoked salmon, chicken and/or ham.

Any way you serve it and at any time of the day, I enjoy this tradition of taking time for friends with a  cup of tea.  Happy Birthday Anna! 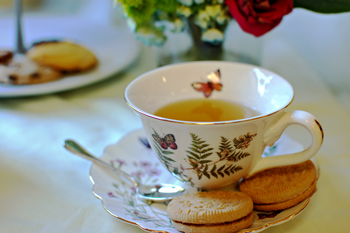